Note: for the beginning of the story of the Brunies family in New Orleans and for Abbie Brunies and the Halfway House Orchestra, see VJM 150.

George Clarence Brunies was the youngest of the seven children of Richard and Elizabeth Brunies. He was born on February 6, 1902 in New Orleans at 2135 Rousseau St, one block from Tchoupitoulas Street. He followed in his older brothersĺ footsteps and took to music naturally. His first instrument was an alto horn, but when he played his first professional job he had switched to trombone, the instrument that would make him famous. He had great admiration for his older brother Henry, whom he regarded as a better player than himself. That first job was at Milneberg in about 1915, when he was about 12 or 13 years old. The story goes that there were forty people in front of him when his trombone slide slipped out of his hands and flew off into the lake. Young George had oiled it a little too much. But he rolled up his trouser legs, went into the lake and brought it back. After that he put his horn back together and finished his first job1.

When brother Abbie passed up the opportunity to go to Chicago and join drummer Joe "Ragbaby" Stephensĺ band, it was Paul Mares who took the job and left New Orleans. Stephensĺ band included trombone player Tom Brown, who by the end of 1920 had decided to leave. Mares suggested George Brunies as Brownĺs replacement, and so in the winter of 1920-1921 the youngest Brunies boy joined what was to become the New Orleans Rhythm Kings. The full history of this important group can be found in existing jazz literature2. In 1922 the NORK made their first records, for Gennett in Richmond, Indiana, and thus the youngest of the Brunies boys was the first to get on record. In 1923 the NORK disbanded ľ victims of internal petty jealousies over money. The bandĺs leader and musical director, Elmer Schoebel, took the rhythm section along to form a new band to play at the Midway Gardens, and Paul Mares returned to New Orleans to recruit musicians to replace them. However, this new NORK only existed for a month or so and then their days at Friars Inn were over. Despite having left the Friars Inn, the NORK still had contractual obligations with Gennett, so two more record sessions were held, in March and July of 1923. On each occasion Paul Mares was able to put together a group of top-flight musicians, the last session even including black piano player Jelly Roll Morton, most probably at the suggestion of music publisher Walter Melrose, who as usual had a strong hand in the selection of the tunes recorded. On the records from the first of these sessions the band was billed New Orleans Rhythm Kings for the first time, the labels adding "formerly Friars Society Orchestra."

George found regular work in a band at the Valentino Inn, led by sax player Dale Skinner. It included Kyle Pierce (piano), Chink Martin (bass) and Bill Paley (drums). Bix Beiderbecke and his friend, banjoist Bob Gillette rehearsed with this band but were not hired3. Other gigs George had around this time were at Eddie Tancilĺs and at the Midway Gardens. The next year he got his big break with bandleader Ted Lewis, courtesy of his brother, Henry. Henry was a close friend of Ted Lewis, and they would often sleep in the same room when their paths crossed, so that they could catch up on gossip and upcoming musical events. Henry telegrammed Lewis to see if he had a job for George, and Lewis replied, yes, George could join4, sitting alongside the celebrated ĹLaughing Trombonist,ĺ Harry Raderman, Lewisĺ regular trombone player. Lewis has used two trombonists, Raderman and Chicago-born Frank Lhotak (a veteran of the Original New Orleans Jazz Band, led by pianist Jimmy Durante) since 1921, but Lhotak left the Lewis band whilst they were appearing in Chicago in late 1923. Harry Raderman did a lot of freelance recording work outside Lewisĺ band at this time, and therefore may not always have been available. Certainly his style and Bruniesĺ were very different, as can be heard when comparing Lewisĺ recordings from late 1923 with those of early 1924. Bruniesĺ trombone is heard prominently on the bandĺs first 1924 recordings, Dream Daddy and Mr. Radio Man coupled on Columbia 82-D. The final ensemble of Mr. Radio Man, recorded February 10, 1924, is purely in the NORK tradition, Brunies taking a fine break. His next title with Ted Lewis was even better. San, recorded on April 10, 1924, has two of Georgeĺs solos. The first is 16 bars on trombone with breaks in the middle, the second sounds as if it is played on a trombone mouthpiece, the first 8 bars alone, then 4 bars in a chase duet with trumpeter Dave Klein (see note 6). A little-known but superb recording5. Lewis was happy with his new trombone man and signed a photo for George: "Your pal Ted Lewis May 10, 1924". 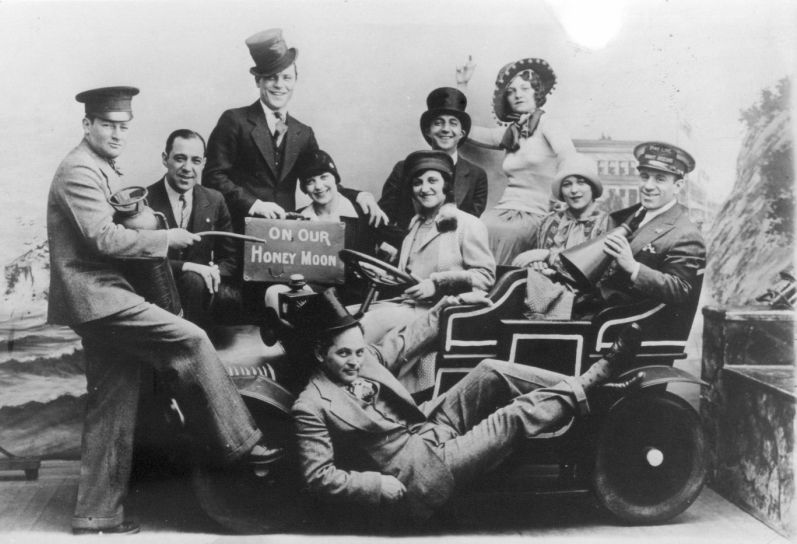 George Brunies made only a few recordings away from Ted Lewisĺ band during the years he was employed by Lewis. Most of these were for Edison and Pathe under the name of the bandĺs sousaphone and string bass player Harry Barth, including an excellent version of I Like Pie I Like Cake on Pathe Actuelle 036202, on which he and the underrated Dave Klein solo. However his most famous is the session with the Wolverine Orchestra, featuring Bix Beiderbecke, which yielded Sensation and Lazy Daddy. George contributed solos on trombone and kazoo6.

Incidentally, though sometimes regarded as a poor imitator of the ODJBĺs Larry Shields, Ted Lewis must have loved the NORK sound. Through the years he recorded many of the tunes that the NORK made famous. Even before George Brunies joined his band, Ted Lewis had recorded Tiger Rag. After Brunies joined Lewisĺ band made successful (both musically and commercially) recordings of San, Eccentric, Milenberg Joys, Tin Roof Blues, Angry, Tiger Rag (an electrically-recorded remake in 1926), Bugle Call Rag, Shim-Me-Sha-Wabble, Clarinet Marmalade, Farewell Blues, San (in 1924 and 1930) and Sobbinĺ Blues. In addition to this jazzy repertory, working with showman Ted Lewis meant a busy life of national and international touring, theatre and cabaret work, making early sound movies and recording prolifically. No small wonder that George liked to work with Ted Lewisĺ band. He stayed with Ted for ten full years and still recorded with Lewis occasionally thereafter, even guesting with Ted into the 1960s. During those ten years, Brunies contributed scores of punchy, gutsy solos to Lewisĺ Columbia records, sometimes on the most mundane material. For instance the inane pop tune Hi Diddle-Diddle has a powerful Brunies solo, blown into a bucket mute. Likewise, Whereĺd You Get Those Eyes has fine solos from both Brunies and Dave Klein, not to mention from Ted himself. When cornetist Muggsy Spanier, an old Chicago friend, joined the Lewis band in 1929 George found a perfect sparring partner. Together they brighten many a Lewis record, particularly on sides such as Lewisada Blues and Aunt Hagarĺs Blues. 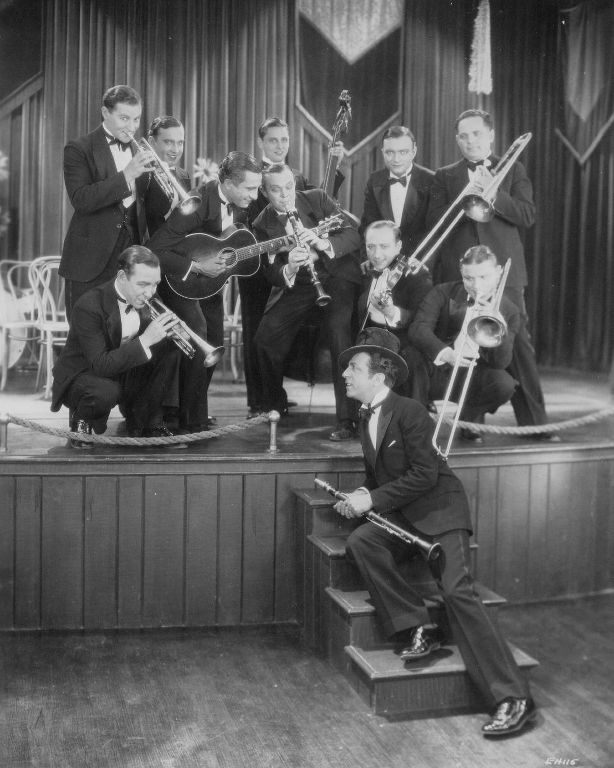 George Bruniesĺ further career is too well-known to be repeated here in detail. After he left Lewis in 1934, he gigged in New York on 52nd Street and played with Muggsy Spanierĺs Ragtimers in the late 1930s. During the 1940s he became recognized as possibly the best practitioner of the traditional New Orleans trombone style, billed as the "King of Tailgate Trombone" and recorded prolifically with groups centred upon guitarist Eddie Condon. 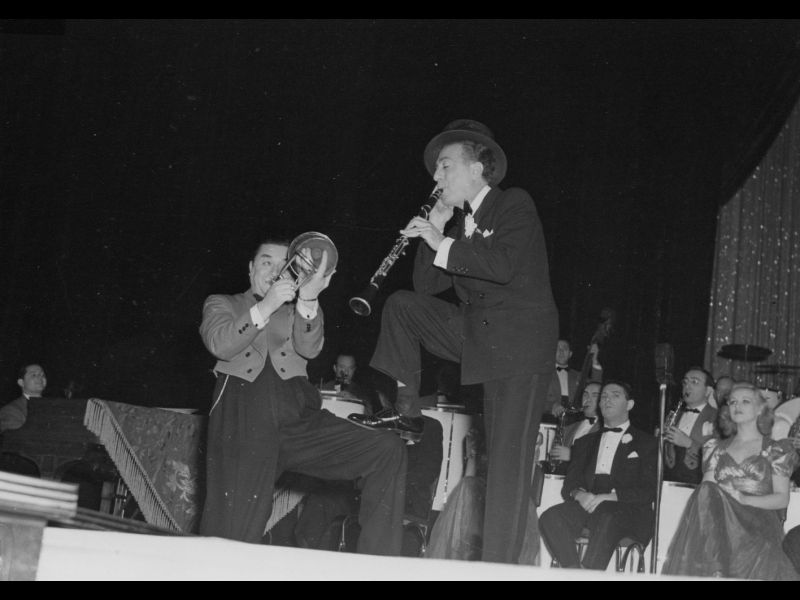 George Brunies and Ted Lewis play 'St. Louis Blues,' sometime in the 1950s. Ted insisted that Brunies reproduce his solo off the 1926 version of the tune note-for-note almost nightly, much to Bruniesĺ frustration. One night, he cracked and played a different solo - Ted went berserk! Mark Berresford Collection

Georgeĺs great-nephew, Keith Brunies tells what happened to Georgeĺs trombones: one day George was playing on the steamboat President on the Mississippi with Sharkey Bonano, and his nephew Little Melvin went to see him. This next generation Brunies boy wanted to play a horn like most of his family and told his uncle George so. George left and returned with his first trombone in his hand, the one that he played while with the NORK and Ted Lewis. He handed it to Little Melvin. The family still owns it today. It was manufactured by Aulds, Los Angeles, patented 1912. George bought another trombone in the 1960s, which is now in a museum.

George only cleaned his trombone on the inside. He had a trick that he learned from his older brother Henry; he would play his trombone without using his right hand, but with the slide touching the floor. So the slide had to be oiled in order to fall by itself when held vertically, or else he couldnĺt do this trick.

George Brunies was married twice. He married his first wife, Madeleine Logan, in 1926 and they later divorced. He subsequently married his second wife, Cloris, who had a son, Harry, by a previous husband. George died at the age of 72 on 19 November 1974 in Chicago, the town where he spent most of his later years.

4 Information from Keith Brunies, who was told it by his grandmother.

6 All discographies show Brunies playing a kazoo on Lazy Daddy. This is almost certainly wrong. According to trumpet player Hans Eekhoff it is clear to brass players that Brunies played his solo here (and on Ted Lewisĺs San) on his trombone mouthpiece only. A kazoo has a different, more buzzing sound. Hans adds that George Brunies was a showman, who had a famous trick of taking his trombone apart piece by piece while continuing to play and finishing with just the mouthpiece.