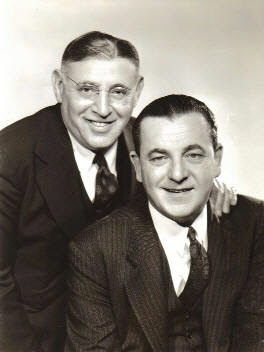 Arthur Fields (1888-1953) was a successful singer, songwriter, vaudevillian, recording artist, army recruiter, and publisher. Best remembered as the co-author of the 1914 song hit, ōAba Daba Honeymoon,ö his songwriting career spanned over four decades, from 1911 until the time of his death in 1953, and his recording career from 1914 to 1942. As a studio vocalist, he was the first white singer to release records with a black band accompaniment (he made several sides for Aeolian Vocalion in the years 1917 to 1919, with Ford DabneyÆs Band, when the latter was featured in ZiegfeldÆs Midnight Frolic), and is also remembered by record collectors for the countless vocal refrains he contributed on jazz recordings, particularly those by bandleader Fred Hall.

One aspect of his career that was overlooked by his early biographers (including his own press interviews) was his one-time attempt to market himself through his own music retail outlet in 1923.

Fields was still a household name in the record business in 1922. Even though he recorded less material for major labels like Victor and Columbia, the public still recognized his name, thanks to the rise of smaller record companies increasing his output. He was still a prominent vaudeville singer at the timeŚwhenever he would appear in theaters, newspapers hailed his coming, knowing that the audiences would finally get to see and hear ōthe phonograph singerö before their eyes. Now that the country was pulling itself out of a recession, it seemed like the perfect time to increase his income by marketing his name through his own business, and not just by records, sheet music, and vaudeville bills like he had done for years.

In December 1922, with his business partner Louis A. Duhan, Fields opened the Arthur Fields Song Shop at 2094 Seventh Avenue, as a storefront under the Hotel Theresa (the shop never moved, as some authors claimed). Nothing is known about his business partner, Duhan. He does not appear in any early 1920s New York City directories, or in the censuses. (There was a Louis A. Duhain who was a real estate agent, but this is clearly not the same person because of conflicting residences.) According to the Manhattan land conveyances, Duhan had some experience in transacting property nearby on the West side of West 124th Street, the next block over from the Hotel Theresa.

The formal opening of the Song Shop took place on January 2, 1923, although it was clear that it was already operating weeks earlier. On December 11, 1922, a business certificate was granted to Fields and Duhan, stating that they were ōconducting and transacting the business of a Song Shop and sale of phonographic records and piano rolls at No. 2094 Seventh Avenue, Manhattan, New York City.ö

The property from which the Song Shop operated was owned by the estate of Gustavus Sidenberg. Sidenberg owned the property since 1892, and constructed the Hotel Theresa on the site of the old Hotel Winthrop in 1912, naming the new hotel after his late wife. When Sidenberg passed away in 1915, his estate executors and trustees continued to lease the storefronts along the hotel, but strangely, according to a scrutinizing search of the block and lot transactions, no lease was granted to Fields, Duhan, or to anyone while the Song Shop was in business. The business license could not be found in the Department of Consumer Affairs either, if one was ever filed.

But it seemed obvious that Fields was trying to conquer the realm of music retail by offering a wide range of musical merchandise. The store not only carried records and piano rolls (as the certificate indicated), but phonographs, sheet music, musical instruments and, as a record duster boasted, ōEVERYTHING IN MUSIC.ö

Among the phonograph records sold (which probably included Banner and Vocalion records) were a special custom-made label for the Song Shop, called the Arthur Fields Melody Record. These labels were manufactured by the Fletcher Record Company, Inc. of Long Island City, New York. John Fletcher formed the new company with Black SwanÆs Harry Pace in 1922. In early February 1923, the New York Clipper announced that Fletcher had been producing four disc brands: Black Swan, La Belle, Melody, and Olympic. (The latter would serve as the ōparentö label for this new group of labels.) It was practical of Fletcher to manufacture special labels for specific businesses, and other special labels that followed included Mac-Levin, Majestic, and the Arthur Fields Melody Record.

Based on inspected copies, the Arthur Fields Melody Records duplicated material from OlympicÆs 1400 dance series, and 1500 vocal series, and typically used the same couplings and catalog numbers from their parent Olympic issues (the recordings were also issued on Black Swan, La Belle, Mac-Levin, Majestic, Melody, Puritan, and Triangle). One exception is knownŚa single-sided issue containing FieldsÆ solo of ōLost (A Wonderful Girl)ö was assigned its own catalog number (#5101), taken from Olympic #1513 as ōRussell Paige.ö In fact, solos by Fields in OlympicÆs 1500 series credited him under pseudonyms such as ōRussell Paigeö and ōWalter Hale,ö whereas the Arthur Fields Melody Records correctly credited him on the labels.

The earliest published account of the Arthur Fields Melody Record (from a collectorÆs perspective) was written by Carl Kendziora, Jr., in his ōBehind the Cobwebsö column in Record Research magazine (January 1961). At the time, only one issue was known (#1516), and Kendziora did not know that they were affiliated with FieldsÆ Song Shop. At this writing, there are at least six known releases, with at least three label variations. (See the following illustrations and discography for examples.) 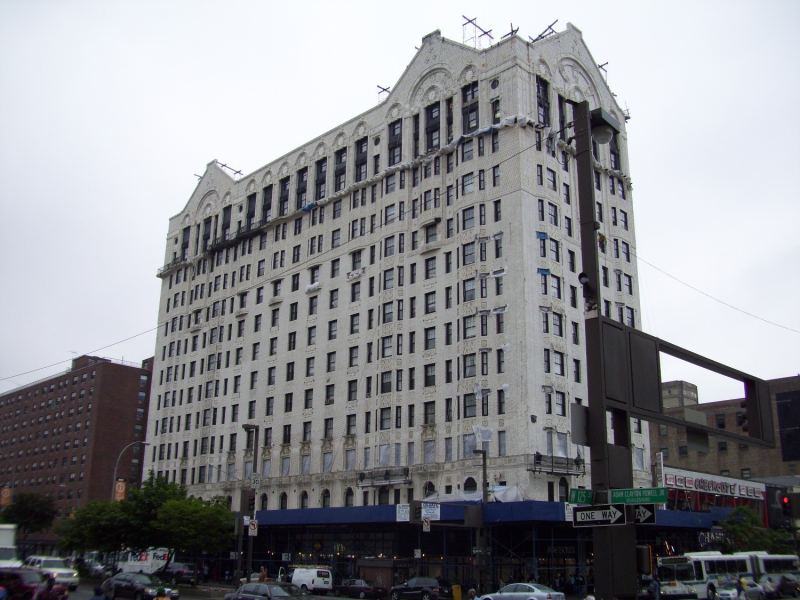 HarlemÆs famous Hotel Theresa stands today as a historic structure regarding black history, where famous jazz artists like Louis Armstrong, Duke Ellington, and Billie Holiday once stayed and played. Virtually no one remembers that it once housed the white singer Arthur FieldsÆ short-lived music store from 1922-1923. Photo by Ryan Barna.

It was obvious that in May 1923, Fields had plans to return to vaudeville, but instead of going solo, he would perform with the famous Avon Comedy Four (with Joe Smith, Charles Dale, and Harry Goodwin). The reason behind this career change is uncertain, whether one of the members invited him, or if he already saw bankruptcy lying ahead for himself and needed another job to rely on. Either way, he debuted with them on June 2, 1923 at ProctorÆs in Newark, New Jersey, performing their old sketch of ōA Hungarian Rhapsody.ö Throughout the month of July, Fields abandoned the recording studios and enjoyed a successful tour with the Four in the Midwest, playing in major theaters in Chicago, Kansas City, Milwaukee, and Minneapolis. He was not around to manage his Song Shop, which was now heading for the worst.

Fields probably returned to New York City in late July 1923. On August 1st as a first step in filing for bankruptcy, Fields and Duhan filed an assignment to Jesse S. Libien, a printer. Libien was now put in charge of the business, probably to sell or exchange the Song ShopÆs assets to help ease FieldsÆ debts. Twenty days later, on August 21st, Fields filed a petition for bankruptcy alone, with his debt totaling an astonishing $14,973, with assets unknown. Due to the lack of surviving documentation and witnesses, the full story behind the storeÆs demise may never be known. A few theories of what might have occurred include:

Mismanagement? Fields was unavailable in July to supervise the operation of his store, although the massive debt he owed suggests that it had been accumulating for months, and that it did not occur suddenly in July. But management flaws could have played a role (marketing, inventory, prices, appearance, etc).

Lack of advertising? The store was not listed in the New York City directory published in March 1923, nor was it advertised in any inspected New York City newspapers. No ad space was taken out in phonograph trade journals like Talking Machine World either. How did New Yorkers know that the store existed?

More supply than demand? Several businesses met their fate with this problem, and judging by the massive inventory the store carried (records, phonographs, sheet music, piano rolls, musical instruments, etc.), this very well could have been the case.

We may never know the full details of his bankruptcy either, including how much he owed other businesses, like the Fletcher Record Company. The proceedings were transcribed into a court ledger, and then the original documents were discarded. According to the New York Times, the principal creditors were:

Bernard Meyer $6,000 (role unknown; a search in the local newspapers, the New York City directories, the 1920 census, and the Manhattan land conveyances is inconclusive as to why Fields owed him such a large amount)

After August, Fields disappeared from the recording studios again, touring the next two months with the Avon Comedy Four in California. He would not return to New York City again until March 1924, and between March and June, he alternated between the recording studios and the stage, making recordings on an occasional basis. His season with the Four ended at the Orpheum Theater in Brooklyn, during the week of June 16th. At this time, Fields returned to recording on a regular basis, but found that he was no longer in demand with the major companies. Edison did not use him again until 1926, and Victor until 1932. Brunswick only used him occasionally as an uncredited band vocalist on their label, and Columbia used him sparingly for their high-priced ōDö series, mostly reserving him for their budget labels like Harmony and Clarion. These four major companies were already updating their catalogs with new and exclusive talent, thus shifting FieldsÆ energy to smaller companies like Regal, Pathķ, Grey Gull, Emerson, etc. The Song ShopÆs failure must have been embarrassing for Fields, and it coincidentally marked the end of his enjoyment as a prominent artist.

However, as a studio vocalist, he managed to wax several records with many hot bands of the decade; among them are BaileyÆs Lucky Seven, the California Ramblers, Ross Gorman, the Grey Gull studio band, and Fred HallÆs Orchestra. Fields met Hall in 1926 while working for the Emerson Recording Laboratories, Inc. Hall was EmersonÆs studio director, and the two struck up a partnership that would last for the next fifteen years. The team became prolific songwriters, mostly writing material for the ōBö sides of inexpensive discs, with Fields singing the vocal refrains behind HallÆs hot accompaniments and scat vocals. The two would go on to write, record, broadcast, and film stereotypical ōhillbillyö compositions, and succeeded as businessmen when they founded the Piedmont Music Company, Inc. in 1931, to meet the demand for sheet music copies to their ōhillbillyö compositions (the corporation was sold to the Edward B. Marks Music Corp. in 1944). Fields and HallÆs successful radio programs and songwriting earned them a lot of publicity during the 1930s, and his early attempt as an all-music retailer was quickly overshadowed.

The Arthur Fields Melody Records are among the most elusive 78rpm labels in existence. The Hotel Theresa still stands today, but the lot where the Song Shop operated is now one half of a White Castle hamburger restaurant.

The story of Arthur Fields and his partnership with Fred Hall will be discussed in detail in a future update.

All selections were recorded by the Fletcher Record Company, Inc., in their studio at Long Island City, Queens, New York, between November 1922 and January 1923.