It has been a common assumption for a half century or more of chronicling jazz history that 1920s-era record companies were totally ignorant about the nature of jazz. Not long ago, I discovered a large cache of promotional materials from Victor, Columbia and Brunswick and, while, generally supporting this assumption, does contain some surprises; flashes of insight, particularly from Victor.

In the fall of the 1926, Victor began producing a series of promotional booklets highlighting its new “Orthophonic” Recordings – those that were electrically recorded. Victor executives apparently decided to promote jazz, not as generic dance music, but as an African-American art form and build a roster of such artists whom they touted as the “authentic source of jazz.” This is an abrupt change from most companies who built their jazz offerings around white groups like the Original Memphis Five or Red Nichols Five Pennies and lumped them in with general dance tunes.

Victor started its jazz promotion with its second Orthophonic promotional booklet dated October, 1926 announcing the debut of one of history’s most classic set of recordings:

This announcement bore the same prominence as new recordings by Leopold Stokowski and Pablo Casals – Morton was not simply relegated to a single line listing as were most new releases. In addition, the release was packed in a special collection of representative music sold to promote the company’s diverse group of Orthophonic Recordings. .
A few months later, March, 1927, Victor prominently featured another Morton disc: 20415, Doctor Jazz-Stomp and

“with Jelly Roll, we introduce, for the first time, the Dixieland Jug Blowers. Some of their effects are produced by blowing into jugs – empty ones of course – much as the wind blew into the bottle-neck in Uncle Tom’s Cabin. Wild dances…”

Prior to these issues, the company had offered little jazz: only two electric jazz recordings by Thomas Morris Hot Babies and a few scattered acoustics. Soon after this release, however, Victor signed Bennie Moten, Charles Johnson, Dixieland Jug Blowers and a number of female blues artists, though none received Morton’s acclaim; reinforcing clarinetist Omer Simeon’s statement that Victor regarded Morton as a star.

In July 1927, Victor began a special Pacific Coast and Rocky Mountain section featuring West Coast artists like Ernest Loomis Orch, Art Hickman, Art Landry and inexplicably, Jean Goldkette’s I’m Proud of a Baby Like You which explains the rarity of this disc today.

Unfortunately, by the following year, Morton and other major jazz artists began slipping further into the back pages as the company promoted its more jazz-worthy dance orchestras such as Ben Pollack, Ted Weems and Coon-Sanders. Even new issues by their star, Jelly Roll Morton, failed to get any new release mention in 1928 (Shreveport Stomp/Shoe Shiners Drag and Wolverine Blues/Mr Jelly Lord being the ones that qualify here.) Interestingly, the first Victor releases by the man who’d be the company’s next best-selling jazz artist, Duke Ellington, and the popular Red Nichols were also left out of the new release announcements, though they were noted the in the Victor catalog.

Victor’s marketing people obviously had a second thoughts about marketing “colored jazz bands” to a general audience which probably explains the gradual fall-off in such promotions. It certainly was not for lack of sales: most of the early Mortons are still quite common today as are a number of Bennie Moten’s.
But in February 1929, the company shook off those second thoughts and devoted half of Page 2 to an announcement of a new series of jazz recordings: 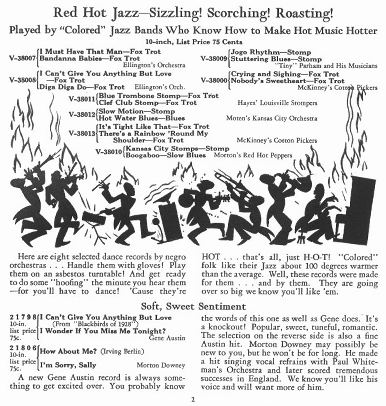 This was the announcement of the V-38000 series. Although today most collectors and researchers refer to the V-38000’s as “race” offerings, they were in fact, “Red Hot Dance” recordings offered to the general public. The releases advertised were two Ellington’s 38007, 38008; McKinney Cotton Pickers, 38000; Tiny Parham’s Musicians 38009; Clifford Hayes Louisville Stompers 38011; Moten 38012; and Morton 38010. Not listed in this announcement were several blues (Blind Willie McTell 38001; A&J Baxter 38002, Jim Jackson 38003 and Gus Cannon Jug Stompers 38006): These were, in actuality, the “race” discs; listed only in the separate 1929 Race Catalog. Shortly afterward, the blues and gospel items that Victor executives believed would have little appeal to general white audiences were transferred to a V-38500 series. In subsequent months the Red Hot Dance Tunes (38000) had six new issues each month listed in the back of Victor’s general announcements. During the latter half of the year, however, the company greatly expanded its new release announcements into 32-page booklets giving prominent displays of Red Hot Dance tunes, including pictures of Bennie Moten’s Orchestra and Fats Waller and enthusiastic prose to match. 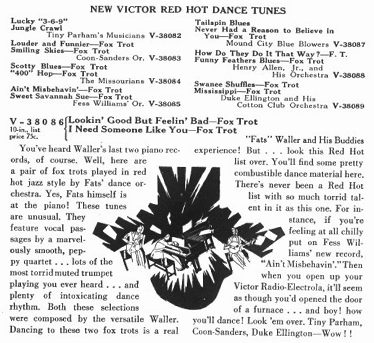 In February, 1930 declining sales caused Victor to cut back on its announcements, restricting descriptions of new releases to a precious few. Once-again jazz items were out; King Oliver’s St. James Infirmary and Duke Ellington’s Ring Dem Bells being the exceptions. In October of that year, the company dropped most of its jazz artists (Moten and Ellington being the exceptions for existing artists, and an addition of Blanche Calloway.)

Brunswick promoted its new releases in a monthly magazine called Brunswick Topics that was a slightly larger format than the Victor booklets; with a much heavier emphasis on pictures – the “Topics” are a treasure trove of pictures of dance band leaders, their vocalists and even some principal soloists. However, the company, which featured a long series of superb jazz such as Red Nichols, the Chicago Rhythm Kings, Fletcher Henderson and the Original Wolverines, lumped all of these into its Dance Music section or listed separately in its race catalog. 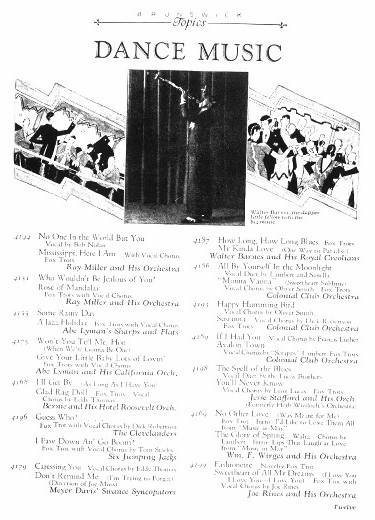 The company did, however promote country music as “Old Southern Tunes” much more aggressively than Victor, which kept most such offerings segregated into a separate “Old Time Tunes” catalog. Each issue of Topics devoted a full page to country offerings, listing a dozen or so new releases, with pictures of string bands and vocalists.

Columbia, like Brunswick, offered its country releases as “Familiar Tunes – Old & New” in its general promotional announcements but published a separate “Blues Catalog” in May, 1927 for race material. Interestingly, the race catalog featured Fletcher Henderson who had always been included in the general catalogs.

Like Victor, it began a series of attractive, descriptive booklets in the fall of 1926 to promote its new “Viva-Tonal” electrical recordings. However, it did not promote “jazz” as a separate music from its general dance offerings; Doc Cook, Fletcher Henderson, Charleston Chasers and Duke Ellington were listed with the California Ramblers, Ipana Troubadors, Sam Lanin, Fred Rich and other dance orchestras.

Interestingly, however, the company offered a block of territory bands every three months in a grouping called “Special Southern Releases” that featured New Orleans groups such as Albert Brunies Halfway House Orchestra, New Orleans Owls, Joe Mannone’s Harmony Kings and other bands from Atlanta (Warner’s Seven Aces, Charles Fulcher, Charlie Troutt) generally playing jazz tunes from publishing houses or originals by the band. Later, Columbia changed the name of the special listings to “Special National Recordings,” explaining that they were recordings drawn from all parts of the country but “not of big, present-day ‘hits’ which have their vogue and are gone. Instead these records will be played and replayed throughout the years.” This explains why many of the New Orleans and Atlanta recordings appear in consecutive number blocks. 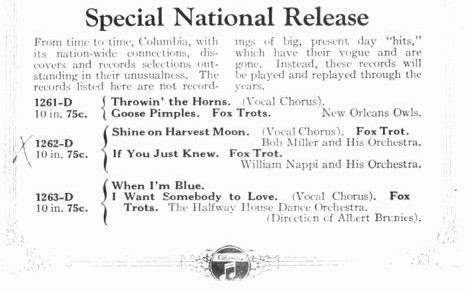 Early in 1929 Columbia returned to its small, fold out listings with simple one-line listings, apparently as a cost-cutting measure, as the company was never on a long-term solid financial footing.

At the end of 1929, the company began promoting its new releases in a series of attractive color fold-outs that could also be mounted as wall posters in music stores. These had separate sections for its 14000-D series race recordings, 15000-D series “Familiar Tunes” (country) music and Irish recordings.

Hopefully, I’ll find a cache of Okeh, Gennett and Paramount promotional material to add to this report.

BACK TO ARTICLES MAIN PAGE