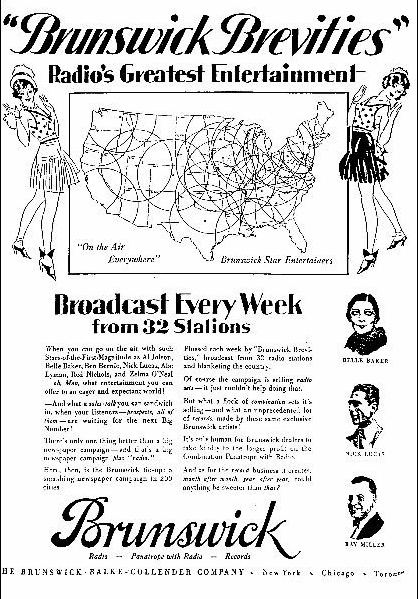 The listing of Brunswick Brevities programs is in program and "part" order, beginning with parts of the earliest programs and recordings in this series. As such there will be instances where matrix numbers will be out of order. Additionally some will be out of numerical order as blocks of matrices were assigned in advance of recording to various recording studios. This also happened when recordings were planned and completed out of final playback order. Since programs often included multiple artists, their parts were often recorded separately on different locations at different times. The final results were that each half hour program was on six 12" single sided 78 rpm discs, which, when played in pre-determined order produced a complete radio program promoting Brunswick records.

The labels appear in several variations. The majority examined have plain white labels with the information printed in black. Some have information (selection, program, part and matrix) typewritten in plain labels. All but one of the labels examined are very plains with no company or trademark appearing at all. White labels occasionally had the program and part stamped or typed on them – most of the information was rubber stamped on the labels at the time of production. The programs were designated with an alphabetical value rubber stamped on the label. Additionally the specific parft of each program (parts 1 through 6) was often rubber stamped with a large hollow number covering much of the label. Those numbers would be difficult to confuse making it easy to broadcast the programs in their proper order.

Artist names rarely appeared on labels except some of the earlier programs with Red Nichols, Be Bernie and Frances Williams. The vast majority of the recordings featured an announcer who would introduce the program, plug Brunswick or Brunswick Brevities during the program, introduce guest artists and announce the coming selection. Famed radio announcer Norman Brokenshire performed announcing duties on many of these recordings. Occasionally featured artists would announce their own selections – including Irving Mills, Ben Bernie and Abe Lyman. Al Jolson, who was the featured artist on the first broadcast, not only announced the selections, he also did a short comedy monologue and plugged his Brunswick records.

Interestingly, Jolson also mentioned in the program that he was there "making our first record for broadcast."

In addition to other information appearing on the labels of the records for the Brunswick Brevities Series, there often appears anotrher number identifying the record’s broadcast number. This number (e.g. Brunswick Broadcast No. 23) appears simply as an internal control number for this specific series by Brunswick. While a long play reissue of the Red Nichols selections states that these numbers indicate a sequence of Nichols transcriptions, that is clearly not the purpose since the numbers are too high to indicate such a purpose. Apparently these numbers were assigned during the planning of the recording sessions . As the programs progress these numbers roughly coincide with some variations, but are not sequential for the playing of program parts and do not seem to have any other logical purpose except as control number.

The labels do contain matrix information but there is no take information. The takes identified in the following listing come from examining the discs themselves which contain both matrix and take unlike most commercial Brunswicks of the period. A small number contain matrix numbers without take (e.g. XE-30709 and XC-4168).

Information on additional listings or records would be greatly appreciated because many have not been examined. Contemporary advertising lists several artists not represented in this listing; Nick Lucas and Belle Baker for example. Please contact me with any additional information: John Newton PO Box 7191 Wilmington DE 19803 USA ([email protected])