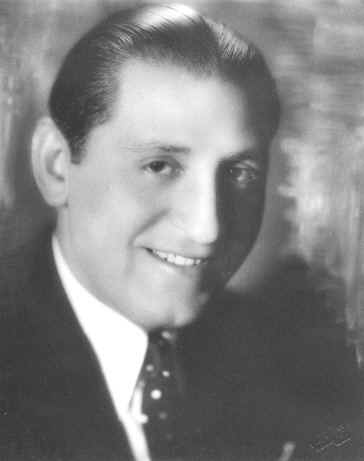 Abe Lyman was born Abraham Simon Lyman on 4 August 1897 in Chicago, Illinois. According to manager and booking agent Harrison Smith in Record Research magazine no. 16 (1958) his family name really was Lymon, but apparently both Abe and his brother Mike changed this to Lyman because it sounded better. Abe learned to play drums at a young age and by the age of fourteen had a job playing drums at the Colonial Café in Chicago. He also worked in the Chicago movie houses, but later he said he did this without pay, just to see the movies. Here he saw the early comic actors like Buster Keaton and Fatty Arbuckle and film cowboy Tom Mix. His brother Mike had left Chicago for Los Angeles and this would prove to be an important factor in Abe's future career as well. How this may have happened was told more than fifty years later by British, but American-born, bandleader Roy Fox in his autobiography 'Hollywood, Mayfair and All That Jazz' (Leslie Frewin, London, 1975). Fox, born in Denver, Colorado in 1901, had already gained a few years of experience as a trumpeter in California when, one evening in 1918, he was approached by Mike Lyman and Mark Fisher, a dance band leader. Lyman told him he was going to open the "finest night club in the country" in Santa Monica, near Hollywood. The name would be The Sunset Inn and Mike's brother Abe was coming from Chicago to lead the band.

Towards his own band
The precise details of the personnel of Lyman's first band is still a subject of research - research not only around the activities of the early Lyman band, but also those of Paul Whiteman and Art Hickman with whose groups there was considerable interchanging of personnel. We are very pleased to have received some additional information from Marilyn Fletcher daughter of Gus Mueller, the New Orleans clarinet player, who joined Lyman in 1920.

Probably holding the trombone chair in Lyman's first band was Albert 'Buster' Johnson. Before he joined Lyman in 1918 he had been a member of the Frisco Jass Band with Rudy Wiedoeft and pianist and future bandleader E. Arnold Johnson. With this group he made several excellent sides for Edison in 1917. He subsequently joined a five piece group that included Henry Busse on trumpet, Gus Mueller on clarinet and one Al Conklin on piano. However in September 1918, just before the war was over, Gus was drafted into the army. The next year, 1919, he was back in California and, with Busse, played in a band at the famous Fairmont Hotel in San Francisco. On 20 December of that year Mueller, Busse and Johnson copyrighted the tune that was to become a great hit a little later, Wang Wang Blues. 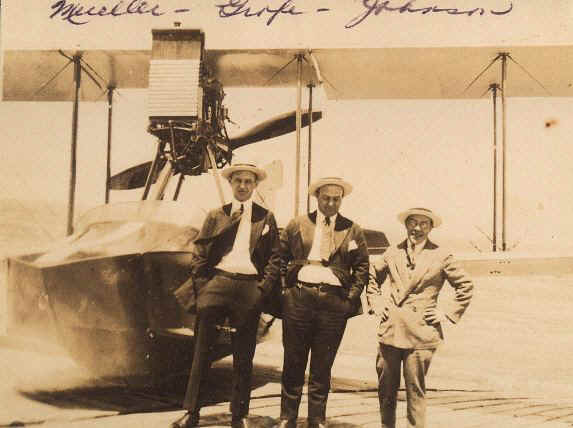 Later that year, news had got around that a new band was coming to Los Angeles. This was Paul Whiteman's new band, which was opening at the Alexandria Hotel. Paul was following the trend started by another dance bandleader, Art Hickman, who was the first to incorporate a saxophone section into his band. Like Hickman,  Whiteman's band included two reed players, Leslie Canfield and Charles Dornberger. It also included Gus Mueller's buddies Henry Busse and Buster Johnson which made it attractive for Gus to join too, which he did in February 1920. A little later Whiteman accepted an offer from S.W. Straus, owner of the Alexandria, to take his band East to supply music at his new hotel in Atlantic City, The Ambassador. Johnson and Mueller left Whiteman after only half a year in the East. During that short period they participated in Paul Whiteman's first recordings, including the hits Japanese Sandman and Whispering, along with their own composition Wang Wang Blues. 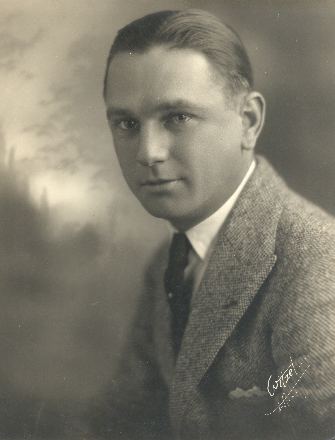 In his book "Jazz" Paul Whiteman relates why Gus left: "he was wonderful on the clarinet and the saxophone, but he couldn't read a line of music. I tried to teach him, but he wouldn't try to learn …I couldn't understand why he was so lazy or stubborn … he said he was neither. "It's like this", he confided one day. "I knew a boy once down in N'Awleens that was a hot player, but he learned to read music and the he couldn't play jazz anymore. I don't want to be like that." In his book, Whiteman continues the story on Gus like this: "A little later, Gus came to say he was quitting. I was sorry and asked what was the matter. He stalled around a while and then burst out: "Nuh, Suh, I jes' can't play that "pretty music" that you all play. And you fellers can't never play blues worth a damn!"

Around September 1920 Gus was back in Los Angeles. It was probably about this time when he and Buster Johnson joined Abe Lyman. In L.A. he would also meet another old friend, trumpeter Ray Lopez. Gus and Ray had been members of the first jazz band to leave New Orleans, Brown's Band From Dixieland, who traveled North to Chicago in May1915 to play in Lamb's Cafe. Ray's story was told in detail by Dick Holbrook in Storyville magazine in 1976/1977. From 1917 onwards Lopez had been part of singer Blossom Seeley's act. He told Holbrook that Seeley never had time for any recording as long as Ray was in her group and she did not allow any recording activities on the side either. He recounted an occasion when Seeley was in New York on the Orpheum Circuit on the same bill as Vi Quinn, a dancer/entertainer who was backed by a group that would become famous as the Original Memphis Five. Their leader Phil Napoleon asked Ray to join them on a recording date, but Seeley would not permit him to do so.

In June 1920 Mike Lyman sent Ray a telegram with an invitation to join Abe's band, which was to open at the Sunset (or rather a re-open, unless Roy Fox was two years off in his memory). In the same telegram Mike asked Ray for a suggestion for a trombone player, the position probably being taken by Buster Johnson. Ray took the trumpet job and joined the band in the late autumn of 1920. 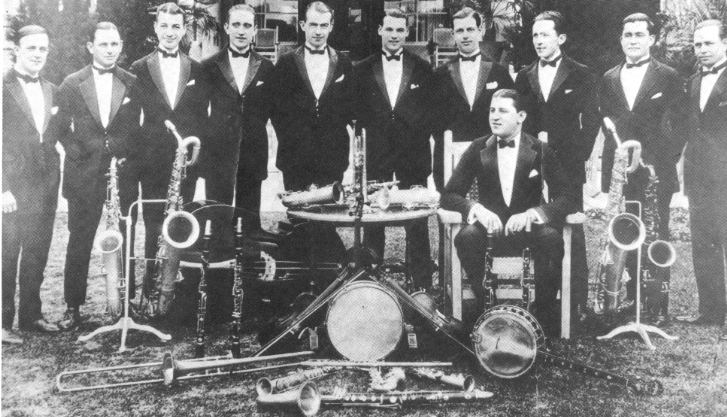 By this time Lyman's band was coming into shape. He now had a nine-piece group, probably consisting of Roy Fox and Ray Lopez, trumpets, Buster Johnson, trombone, Gus Mueller, reeds, Louis Garcia, violin, Henry Cohen, piano, Jake Garcia, bass, Charlie Pierce, banjo, and Abe himself on drums. Pianist Henry Cohen was to gain fame as the composer of Canadian Capers and was killed in 1933 when his car was struck by a train whilst he was playing at the Chicago World's Fair.

Towards fame
The Orpheum Circuit was based on the West Coast, and so it is no surprise that one day in 1921, Vi Quinn and her little jazz band came Los Angeles. A row developed among the bandsmen for reasons which have never clearly been substantiated which brought the act to an end, and one member of the jazz band decided to stay a while in sunny California. This was trombonist Miff Mole, who joined Abe Lyman's band when Roy, Ray and Gus were members. Talking about Ray Lopez, Roy Fox relates in his book that "he handled the jazz and I played "sweet", and "when he and Miff and Gussie "busked" a few choruses it was something I'll never forget". Miff soon tired of Los Angeles and stayed only for a short time, and was probably replaced by Vic Smith.

The Sunset was a success for both Lyman brothers. All the movie stars came to see and be seen. The stars that Abe Lyman had seen on screen in the Chicago movie theatres only a few years earlier were the nightly guests. People like Mary Pickford, Norma Talmadge, Charlie Chaplin, Buster Keaton and Harold Lloyd. Unfortunately for everybody, this came to a stop when the Fatty Arbuckle and Wallace Reid scandals broke and movie stars had to sign contracts with severe moral clauses which, temporarily at least, drove them away from the night spots. Consequently Mike Lyman had to close the Sunset Inn. Things looked dark for a while, but luck returned when Abe got a contract to play in the Cocoanut Grove in the beautiful Ambassador Hotel. One of the conditions was that he would add a saxophone and a violin player. They opened on 1 April 1922. Publicity had been effective; on the opening night there were an estimated 1500 guests in the Grove and 500 more outside. The Ambassador was a top location for a many year - it was here that kings and presidents would stay in the company of famous movie stars and other famous personalities. From Charles Lindbergh and John Barrymore to Nikita Kruschev and the Queen of the Netherlands, the Ambassador boasted an impressive guest list. 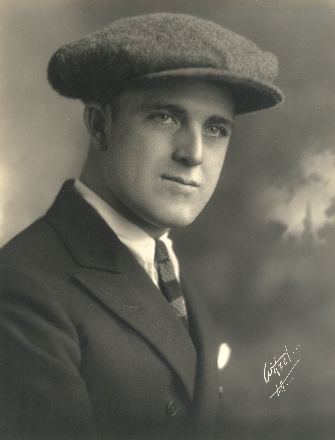 Shortly after Abe Lyman's band debuted at the Ambassador Hotel, they cut their first record. This was for a local record label by the name of Nordskog, which started issuing records in 1921, mainly of local talent. Abe Lyman's success at the Ambassador made him very attractive to Nordskog as a recording artist. So in the summer of 1922 the band went to the primitive studio and recorded two sides which were issued on Nordskog 3019. The tunes were Those Longing For You Blues and Are You Playing Fair? Abe Lyman's first record demonstrates what must have been his band's policy. One side features some of the hot soloists in his band while the reverse emphasizes fully arranged straight dance music. The jazz side is Those Longing For You Blues, a composition by Chicago pianist and bandleader Frank Westphal. From its first notes it is clear that Lyman's little band was positively influenced by its two New Orleans musicians, Ray Lopez and Gus Mueller. Lopez plays a strong lead, Mueller soars above him and together with the trombone player they manage to produce a pure, early New Orleans sound during the first half of the recording. Then Lopez and Mueller use the opportunity to prove their class during their solo spot: Lopez takes off for the first 12 bars with a derby as a mute, Mueller then places a 4 bar break perfectly before Lopez takes another muted 12 bar solo. As if to prove his point, during the final ensemble Lopez tears in with a fine break with some slurred notes. This was pure hot playing in the very best New Orleans tradition.

Later years in brief
A year later Lyman moved from Nordskog, which never had a distribution beyond the immediate Los Angeles area, to Brunswick which at the time was working up to becoming one of the major players in the recording industry. In a 'No expenses spared' policy, backed with massive advertising, they lured away from cash-strapped Columbia Marion Harris, Ray Miller and the biggest name in American show business - Al Jolson. Abe Lyman quickly became one of their main attractions and recorded hundreds of titles for this company between 1923 and 1936, many of which also saw issue in Europe. On the strength of his Brunswick records reputation, he made a European tour in 1929, appearing at the Kit Cat Club and the Palladium in London, and at the Moulin Rouge and the Perroquet in Paris.

By 1930 he had started to make movies and from the mid - Thirties he was involved in radio shows. When he was around 50 years of age he left the music business and went into restaurant management. He died on the 23rd October 1957 in Beverly Hills, California, just 60 years old.

We thank Marilyn Fletcher, Gus Mueller's daughter, who was born in a room in the Ambassador Hotel (!), for her contributions to the above article.