Some 45 years ago I wrote a note in ‘Jazz Records’ against the April 27, 1927 session by Clarence Williams' Blue Five Orchestra at which session they recorded Baltimore/Take Your Black Bottom Outside, to the effect that Eva Taylor was actually the vocalist on these sides. The female voice on Brunswick 7017-A (take 61) is attributed to Kath.[sic] Henderson, so is Brunswick 7017-B (take 57). Brunswick 3664, using take 62 for Baltimore,has the same band credit with only 'Vocal Chorus' on the label. Why did I write 'Eva Taylor??' behind Katherine Henderson's name? Let us go back to 1967/1968, when Storyville editor Laurie Wright first mentioned that the name of Catherine/Katherine Henderson was used for at least three different singers (Storyville # 14, p.166)). In an interview in Storyville # 16 Eva Taylor states: 'Katherine was my niece..., her voice is rather like mine'. She, also says: 'She did make some records with Clarence'. Referring to the QRS sides she also says '...she only made just those few sides'. There is no mention of the Vocalion/Brunswick sides!

Laurie obviously did not play the Baltimore session to Eva Taylor, otherwise they should have noticed that the QRS sides with Katherine Henderson have a quite different vocalist to the Brunswicks! As I have no faith in the fidelity of LP or CD dubbed recordings, only now, after I obtained a copy of QRS 7041, can I tell what I think. Eva's statement that her niece's voice was very similar to hers cannot be confirmed after having compared QRS R 7041 (Katherine Henderson) and OKeh 8665 (Eva Taylor). As the recording dates are very close together the style and interpretation of each singer can easily be discerned. Put both I'm Busy And You Can't Come In (Co 14632-D) and What Can You Do Without Me (QRS R.7054, Frog CD DGF 48) on your turntable and you can hear the difference. Even a part of the lyrics of Do It, Baby (Katherine Henderson) and Shim Sham Shimmy Dance (ET): "twist and squirm like a worm' are sung in such a different manner that there's no question who is who! Katherine Henderson indeed is more of a vaudeville singer than a blues singer (since when was Eva Taylor anything but a vaudeville blues singer? Ed) and in fact cannot be mistaken for Eva Taylor.

The Brunswick recording date was very close to the rehearsals of Clarence Williams' ill-fated musical show BOTTOMLAND, with both Eva Taylor and Katherine Henderson having roles in the production as singers (the Chicago Defender of March 12, 1927 reported that '... Katherine Henderson is expected to be placed in one of the Broadway shows in the near future'). The New York Times of June 28, 1927, reported the opening of BOTTOMLAND at the Princess Theatre on June, 25. Eva Taylor acted as May Mandy Lee and Katherine Henderson as Tough Tilly. It is thus possible that Clarence Williams promised the Brunswick session to Katherine Henderson as vocalist. For reasons lost in the mists of time (illness, perhaps?) Clarence may have asked Eva to record the session instead of Katherine, but as the recording sheets and the labels were already prepared and printed, they did not change the files (see Bill Triggs # 24, with vocal credit as on the label). But if the singer on the Brunswicks is Katherine Henderson we now have four singers of that name. 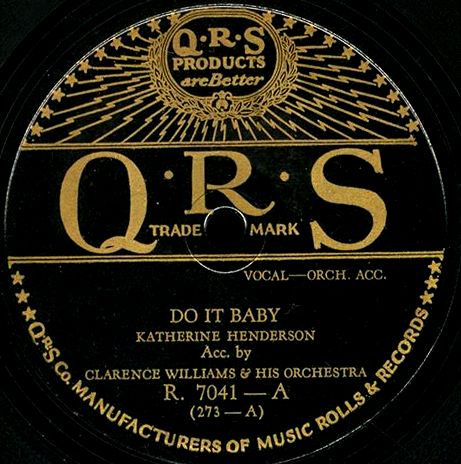 I am firmly convinced that Eva Taylor is the singer on the Brunswick session. What's your opinion?

The Editor writes: I’m not convinced by Bernhard’s theories; the idea of record companies pre-printing recording ledger entries and record labels is far-fetched to say the least. Why would a company go the expense of producing relatively expensive two-color labels without even knowing that acceptable masters had been recorded?

However, I feel that the greatest argument against Bernhard’s theory are the records themselves. I’ve listened carefully to the tracks mentioned, along with the four tracks recorded under Katherine Henderson’s name on QRS (all the QRS sides are available in stunning sound quality on Frog CDs DGF 48 and 49) and, despite the higher fidelity of the Brunswicks, I hear no discernible difference between the voice on the QRS sides and the Brunswick titles. I admit there are a number of similarities between the two singers, but Katherine Henderson has a more dramatic delivery than Eva Taylor, who in comparison has a more ‘personal’, less ‘stagey’ style of delivery. In fact the track Bernhard offers for comparison, What Can You Do Without Me is overly dramatic, verging on an impression of Ted Lewis at his most tragedian! In comparison Katherine Henderson’s Have You Ever Felt That Way bears remarkable similarities to the singing on the Brunswicks. The fact that, even by Eva’s admission, she and Katherine Henderson sounded similar, I think there is sufficient difference to separate them. The reason of course for the difference in the way the words "twist and squirm like a aworm" is that two different singers are involved!

Perhaps readers would like to send in their comments, direct to VJM’s Editorial address or by email.