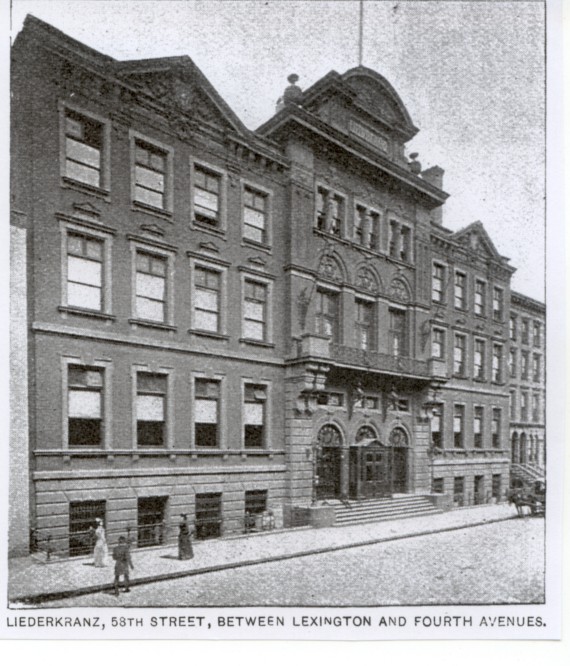 "The ‘Deutscher Liederkranz’, at the north side of East 58 th Street, between Park and Lexington Avenue, gave to New York the fervour of German lyricism. It was organised in 1847, and incorporated in 1860, and it has steadily given, in concerts, in cantatas, in courses of instruction that have powerful influence, the best works of German composers. It has admirably produced works like Mozart’s ‘Requiem’, Liszt’s ‘Prometheus’, and Mendelssohn’s ‘Walpurgisnacht’. Its membership is composed of active members who are musicians or students in the perfect school of vocal music provided by the club, and others to whom the seductive social features only of the club have appealed. Its membership is largely American, or, to be precise, Anglo-Saxon. There are female choruses. The conductor is Heinrich Zollner, of Cologne/Germany, whom the club called to New York in 1890. The festivals of the ‘Liederkranz’, especially the annual Carnival, are thoroughly artistic.

The club-house of the Liederkranz is a large, brownstone building of the German Renaissance. The president is Hubert Cillis."

The above comment on the Liederkranz is by Moses King, dated New York, 1892.

As you may imagine I do not intend to sing the praises of German culture. I will only recall those days, when someone found out that the Liederkranz Hall was probably the best place for recording sessions because of its phenomenal acoustical conditions. It thus received an immense importance for the American dance and jazz music.

Obviously Victor was the first recording company to show up. It seems they exclusively gained the right to do a great part of their recordings here. But that is my personal opinion. On the other hand I know nothing of another record company recording here during the said time.

Who were the artists and bands taken into the studio at Liederkranz Hall? The very first ones were Louise Groody and Charles King, a vocal-duet, accompanied by Frank Banta on piano. As they recorded only one title on 12th April, 1927, issued on VI 20609, it seems to have been a somehow test,. One week later Victor recorded two sides by ‘The Troubadours’, they remained unissued. In mid-May 1927 they ob-viously were able to master their equipment. Within the next three weeks they recorded the following artists:

The next recording session with further on only white artists began in September 1927. The Duncan Sisters, Jean Goldkette, Paul Whiteman and others showed up in the studio. It may be of interest that only a few black bands/artists (Fletcher Henderson, Bobby Leecan, Charlie Johnson and Duke Ellington among them) were in Victor’s New York recording studios. Most of the ‘race records’ were made at different places, in Camden, NJ, or Chicago, IL, for example.

But on December 19th, 1927, Victor for the first time took coloured artists into the Liederkranz Hall. Maybe the club president or one of his colleagues threw overboard their anti-negro position. Thus Duke Ellington could take his 10-piece band into the studio. Three wonderful titles were the result: Brown Berries, East St. Louis Toodle-Oo and Blue Bubbles. But anyone who believes the ban was now broken is mistaken. Still the white bands continued to do most of the recordings. There were Paul Whiteman with Bing Crosby, Nat Shilkret, The Revelers and Waring’s Pennsylvanians. These and many others dominated the scene.

Some of the bands appeared regularly, Paul Whiteman among them. They hardly were to get out of the studio. Only every now and then a black band got the chance to record, Charlie Johnson’s Paradise Ten for example on January 24th, 1928.

Countless further recording sessions of white groups took place. Not only Jazz or Dance music, but Hillbilly, Country and Western, Organ-soli or Vocals were recorded. Most of these artists are nowadays unknown to us.

In May, 1928, the black violinist Eddie South recorded two titles. But what happened in the studio in June that year was a kind of sensation. Jelly-Roll Morton recorded eight sides, two of them remained unissued. But the issued sides belong to the all-time great jazz recordings of that era.

But while white musicians such as Joe Venuti, Eddie Lang, Red Nichols and many others made their records in the studios of other companies, the Liederkranz opened their door too seldom for Victor for this kind of music. Obviously they still adhered to Anglo-Saxon classical traditions.

In September, 1928, Charlie Johnson was allowed to return to the studio. He recorded three titles, one remained unissued. Nevertheless while at other places both white and black jazz musicians put the door handle in the others hand, there was a big silence at the Liederkranz.

But on December 20th, 1928, the fat was in the fire. ‘Warren Mills’ Blues Serenaders’, mostly members of the Ellington band, recorded two titles. The Serenaders were supported by 14 white musicians and a mixed choir of both white and coloured singers. Maybe the allowance to record was given because of the forthcoming Christmas holidays, as again a large pause followed. During this time bands like King Oliver, Fats Waller, McKinney’s Cotton Pickers or Fletcher Henderson made wonderful Victor records but at other locations.

In May 1929 Duke Ellington again recorded in the Liederkranz Hall, but bands like The Missourians, Henry ‘Red’ Allen or Clarence Williams recorded in neighbouring Victor studios in New York the following month. In July to September 1929 there were again several white bands at East 58th Street to record: Leo Reisman, Rudy Vallee, Nat Shilkret, George Olsen or even Gloria Swanson among them. All white but ‘The Four Wanderers’, with J. Rosamond Johnson at the organ. These ‘Four Wanderers’ recorded a few days later the famous Make A Country Bird Fly Wild, accompanied by Henry ‘Red’ Allen and His Orchestra. But this took place in another New York studio.

In September/October 1929 about 100 titles were recorded at the Liederkranz Hall, but only 14 by black artists, among these were Victoria Spivey/’Red’ Allen, Wilton Crawley and King Oliver. You see, the white artists still predominated their black colleagues.

In January 1930 we only find white groups aside from Lizzie Miles. In March Fats Waller recorded two piano duets together with Bennie Payne. They were followed in April by Billie Young with Jelly-Roll Morton at the piano, then Teddy Bunn/Spencer Williams, King Oliver and Fess Williams. Obviously the Liederkranz people decided that a change in their attitude towards the black people was necessary, as again many coloured musicians were at the Liederkranz studio in May to August 1930. We find there Fess Williams, Jelly-Roll Morton, Henry ‘Red’ Allen and Hall Johnson’s Negro Choir. But after that the Liederkranz Hall studio in general seems not to have been used very often by Victor. For reasons we probably never will know the company dispensed with these ‘off-site’ the recording studios in May 1931. We still find many bands, both white and black, recording jazz and dance music, but we no longer know where these recording sessions took place.

To complete my short story about the Liederkranz Hall I’ll add the following piece: In Laurie Wright’s ‘Fats in Fact’, he offers a ‘Memoir from Ernie Anderson’. Anderson writes:

"The studio which Victor had booked for the session was the old wooden walled beer garden which in pre-prohibition days had been called the Liederkranz Hall. It was spacious and the walls and ceilings were all of ornately gilded, carved wood. For many years it was the best acoustical premises in New York City. Later CBS installed radio control rooms at hideous expense, mostly of aluminium and glass. The magical acoustical properties of the Liederkranz Hall just floated away".

And Tommy Benford (STORYVILLE 111, p.106) tells us the story of a Morton recording session. Laurie Wright adds, that this took place at the Liederkranz Hall. I only have to correct the address. The Liederkranz Hall was on East 58th Street.

To put together all the above given details, I made use of Brian Rust’s Victor master book, Vol. 2. I do hope there are not too many mistakes.

I would be very glad to receive additional information on this subject from VJM readers. Please write to me at: [email protected]