WHAT MADE THAT GREAT OKEH SOUND?
A close listen to the best sound of the 1920s
By Steven Lasker 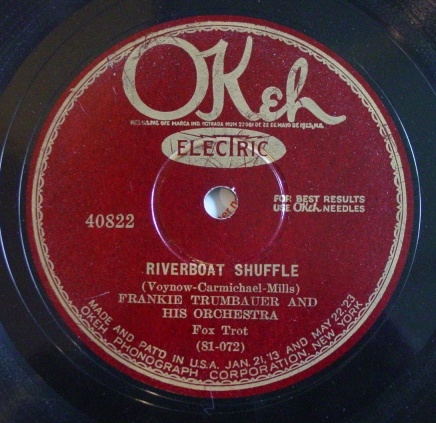 This article will explore the main reason - OKeh's studios - behind the great sound that the label produced.

The OKeh label, owned by General Phonograph Corporation began recording electrically, apparently in April 1926 with a session by Perry Bradford and His Gang (mx80001/2). The results were never issued. The company also recorded acoustically in tandem, the last known acoustical being Esther Bigeou on Dec. 21, 1926 (mx74453). OKeh's early electrics, bearing matrices in the 80000 series, were sonically boxy, distorted but unmistakably electric. These (the main exceptions to OKeh's rule of excellent sound) bear the stamp O-E in the runoff area.

The Columbia Phonograph Corp. purchased OKeh, effective Nov. 1, 1926 and installed its Western Electic equipment by Nov. 26, with mx 80226 by the Arkansas Travellers. This matrix bears the "w" prefix and sounds greatly superior to previous electric OKeh's (Editor’s note: the new OKeh Matix series discography by Ross Laird and Brian Rust shows the first OKeh matrix to carry a W-prefix to be 80199-B by Mike Markel’s Orchestra, recorded 5th November 1926. The Arkansas Travellers session cited above was, according to the file card ‘Recorded By Columbia’ so doubtless there were other similar crossovers of facilities at this crucial changeover period).

OKeh's main office was at 25 West 45th Street, New York and its distributing division was at 15 West 18th Street. OKeh would keep its 45th Street office until sometime in 1931, and I believe this was also the location of its studio in 1926. In January 1927, a second studio was added, evidenced by the dramatic change in recording room acoustics or "room tone" heard in some - but not all -sides. A Jan. 7, 1927 letter by Tommy Rockwell, of OKeh's recording department (reproduced in the notes to the Columbia Legacy complete Louis Armstrong Hot Five and Hot Sevens) bears the address of 25 crossed out with 145 typed above it. After August 30, 1927, a new room could be heard. This facility was at 11 Union Square. This apparently replaced the 145 W. 45th studio.

OKeh kept the 11 Union Square facility until 1930 when a new recording room could be distinguished. This facility was probably 1819 Broadway and was in use for a about a year until it moved to 55 Fifth Ave.. The company kept this studio until July, 1934 when the label was absorbed by the American Record Corp.

Brad Kay and I reviewed a number of OKeh New York recordings and have attempted to group them by studios. We made these determinations by listening to the distinctive "room tone" of each recording.

This new recording room added by OKeh in January, 1927 was large and acoustically resonant. The piano, possibly an upright, was often unusually distant from the microphone and, over the course of May, 1927, grew progressively out of tune. The room tone and piano are so distinctive that Brad Kay was called it "Riverboat Shuffle Hall" after the well-known Frank Trumbauer recording made there.

: A new room, heard from at least Aug. 30, 1927 (Miff Mole 81296/97/98) through at least Feb 11, 1930 (Casa Loma Orch. 403755/56) sounds larger than the room at 25 West 45th but smaller than Riverboat Shuffle Hall. This room exhibits a degree of liveliness between the two. This room is confirmed by the Manhattan telephone directory for summer, 1927 that shows OKeh's studio at 11 Union Sq., and their main office at 25 W. 45th. Also, a letter reprinted in Laurie Wright's OKEH Race Series" book places the company's "recording laboratories" at this address. (Editor's note: Some recordings made here in the winter of 1928 (Miff Mole 401394/5 Nov 26) exhibit some distortion from a defective microphone that grew worse by Dec. 19 when Clarence Williams recorded 401466/7. However, not all recordings seem to have suffered this problem. For example, Joe Venuti's mx 401449/50 from Dec. 12 is free of distortion). The Manhattan telephone directories of 1930-31 show OKeh's foreign department at this address.

(1930-31): This room was heard from at least March 1, 1930 (403791) by Carl Webster’s Yale Collegians. This venue sounds smaller and a bit less lively than the room at 11 Union Square. Brad Kay detected a bass resonance inherent to each room, the one at this address being an octave higher. Manhattan telephone directories list this address as well as 25 West 45th which may have continued as a studio. 1819 Broadway was the Gotham National Bank Building near Columbus Circle. It is also the address used by Columbia/Harmony records since 1921.

: (1931-34): The summer, 1931 Manhattan telephone directory places the general offices of both Columbia and OKeh at this address. They shared a common telephone number (THompkins 6-5200). Neither 25 West 45th, nor 1819 Broadway are listed.. John Hammond in his book, John Hammond on the Record (page 88) noted "in 1932…Columbia's studios were located at the corner of Fifth Avenue and 12th Street."

The company's general offices and studios remained there until July 1934 when both labels were absorbed by the American Record Corp. Brad and I listened to various recordings from the 1931 period to determine when the move was made but could only conclude the rooms were of similar size and "tone."