AMERICAN MUSIC FOR THE BRITISH 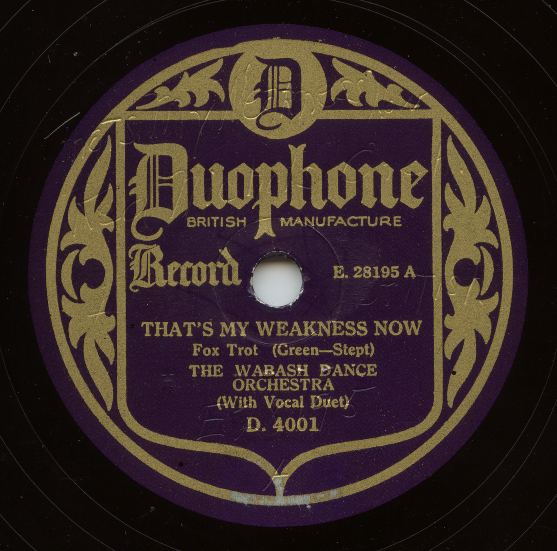 The various companies bearing the Duophone name had a long & complex history from their inception in 1921 and I will endeavour to cover this at length elsewhere. For the purposes of this series I will start in May 1928. By this time British Brunswick was experiencing financial problems, primarily it was claimed, because of the high charges made by American Brunswick for the mother plates sent over to England. To make matters worse the mainly locally recorded 100 catalogue series was not selling well.

Negotiations took place with Noel Pemberton Billings of the Duophone & Unbreakable Record Co. and a pooling of interests took place between the two companies. Brunswick acquired substantial funds from D.&U.R. Co and the latter had the use of factories at Shepherds Bush, Feltham, Slough & Southall in addition to another factory it had purchased at Shannon Corner on the Kingston By-Pass Road in New Malden, Surrey. This was the site of the former Rapson Tyre Works and would be used initially by British Brunswick. They would share the same London offices in Cavendish Place W.1.

In September 1928 Duophone began making recordings in a DB matrix series which would be used for the D500 catalogue series launched in November 1928 at the same time as the D4000 series. The D500s were solid stock pressings.

Pemberton Billings displayed his usual high energy and dedication, frequently sleeping overnight at the Feltham factory and working on one of the record presses in his pyjamas, dressing gown and carpet slippers. He began distributing Duophone Sample Records that bear no details of artist or titles, the label merely stating Duophone Record, Sample Not For Sale. The anonymity is understandable as, in addition to examples of the DB matrix series, with no matrix numbers in the wax, PB also pressed some of his ‘Samples’ from Brunswick plates. These bore the Brunswick catalogue numbers and PB would ensure that when the stampers were made the numbers would be very carefully altered so that when they appeared in the wax on the Duophone samples they bore no resemblance to Brunswick catalogue numbers should anyone in the factory examine them. Thus 171B became X9XB and 3806 became 8806 though I do have one example pressed from the stampers for British Brunswick 3813 by the Six Jumping Jacks where the numbers have not been altered.

We do not know what talks took place prior to American Brunswick starting to record specific titles for British Brunswick in September 1928 nor whether the charge for the mother plates differed from the norm. Nor do we know why they ended up on Duophone rather than Brunswick.

The two new series were launched in November 1928 and the price was 1s6d, half the price of the Brunswicks. By this time PB and his fellow workers had moved from Feltham to Shannon Corner. The D4000s were available both as solid stock or laminated, and you could have the latter sent to you direct from the New Malden factory in one of Duophone’s special circular cardboard mailing covers, postage sixpence, and they arrived safely! The solid stock pressings have a D at the top of the label and the laminated pressings a U (for unbreakable.)

Although the D4000 series only reached D4059 some catalogue numbers were used more than once and some ‘reissues’ were from 1929 Duophone recordings and others from Worldecho masters issued on Worldecho in November 1929 and, strictly speaking, not available to Duophone until January 1930 after Worldecho had gone into liquidation.

Duophone’s final series in the summer of 1929 commenced at F2001 and reached F2012 and, apart from one American title which had appeared in the D4000 series the remainder were local recordings in the DF or DFR matrix series. (Duophone (Foreign) Ltd.)

British Brunswick went into compulsory liquidation in January 1930 and the Duophone & Unbreakable Record Co. followed in March 1930. The New Malden factory had already been sold to the New Malden Holding Co. the previous year and would ultimately produce Decca records but that, as they say, is another story.

SOME INTRODUCTORY NOTES TO THE LISTING

I first listed this series in the Matrix magazine (issues 62-64) in 1965/66. In the intervening years although I have been able to identify more of the obscurer sides, I have been unable to fill in the few remaining blanks nor have I come across any of the alleged issues from December 1928, which I mentioned in Matrix.  These were sent to me during the late 50s by a correspondent whose identity I could be mistaken about after all these years. I had almost decided it was a hoax but then Frank Andrews saw a known Duophone D4000 issue with the name Moss Syncopators handwritten under the label. This is one of the band names on these suspect issues and is yet another name for a Meyer Davis unit. This would make sense, as a man called Joe Moss was working for Davis as New York Manager & Musical Director from 1926 to at least January 1929. I have come to the conclusion that these issues were scheduled but never materialised

Earlier writings on this series have sometimes claimed that all the recordings were especially done by American Brunswick for the Duophone Company.  This isn’t correct. Starting in September 1928 with matrix 28191 by the Six Jumping Jacks, the American Brunswick ledger sheets frequently state `See British Brunswick’ as the only entry against the matrix number. If there was a separate `British Brunswick’ ledger in the American vaults it no longer exists.

Another misleading statement regarding this label is that, on every record, you will find handwritten under the label, the correct identity of the artist together with the tune title, matrix number and take. While this is true for some issues it is certainly not true for all issues or all copies of some issues where you can find these details. Unfortunately the myth persists and when in 1996 Frank Dutton wrote on my behalf to the noted American Brunswick researcher Steven Lasker he replied `surely someone local has pressings you can check for this sort of data’ (If only it were that easy!).  Fortunately Steven did send us what information he could find.

Another added complication is the fact that some issue numbers were used more than once for different couplings therefore we can never be certain that we have traced every single issue.

In the absence of any information on the Brunswick ledger sheets or on the Duophone records we are left with several sides where we have no idea of the identities of the bands involved. Meyer Davis was responsible for many of the recordings issued on Duophone and is probably responsible for some of the unidentified sides.

Geoffrey Orr, the biographer/discographer of the singer Smith Ballew, obtained a lot of detail from Ballew on the Meyer Davis Brunswick sessions on which he sang.  I recall reading somewhere that Davis controlled or owned over 115 orchestras through his agency.

In the case of the alleged December 1928 issues, I have entered the details in italics, with (Dec.1928) against the issue number.

My recording dates frequently differ from those given elsewhere. Mine came either from the Br ledger sheets courtesy of Steven Lasker or from Smith Ballew via Geoffrey Orr. Those which Richard Johnson had planned to include in his revision of the American Dance Band Discography are noted (rj).

The abbreviation ulh means that the information appears in handwriting under the label.

It would overstretch my memory to recall the names of all those who have given me information over the past 50+ years. Some names are acknowledged in the text and I am grateful to those and also to :- Mark Berresford, the late John R.T. Davies, Johnny Hobbs, Dan Mahony for copying out all the American Brunswick file cards, Peter Seago, Eddie Shaw, Bernard Shirley, my old junking partner Derek Spruce, Trevor Tolley and Bert Whyatt

(1) Br 4088 Colonial Club Orchestra; BrE 3900 "King" Solomon & his Miners.(Bob Haring session, vc Jack Parker). The Duophone is said to be a different take to the Br issues. Again, BrE 3900 is a later issue than the Duophone.

(2) William F. Wirges Orchestra probably Ed Ruffner vc. This side has no take in the wax and -B on the label.

Sorry! You'll have to subscribe to the magazine to see the whole series listing!