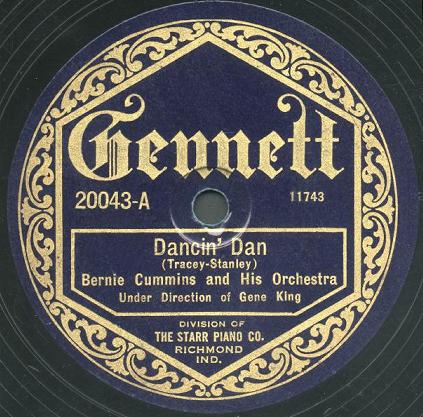 The Gennett label is beloved by collectors of popular music, especially for its jazz, blues and country music recordings. (It is often stated that Gennett was the only company to print the words "race record" on the label. This is not true; Edison did the same.) The history of the label is adequately told by Rick Kennedy in Jelly Roll, Bix and Hoagy (1994), but nothing is said about the catalogue series and matrix series. This article will try to sort this out.

The Starr Piano Company of Richmond, Indiana, was for many years an important manufacturer of pianos and had many stores around the country. It started its Starr record label in 1916, but soon found that other music stores were unwilling to sell a label that in a way promoted Starr pianos, so in October 1916 the Gennett label was launched. Like all labels except Victor and Columbia, who between them held and pooled the patents for lateral recording, Gennett had to use the vertical (Hill & Dale) method of recording. Since many consumers had gramophones only for the latter type, sales were limited.

Gennett's recordings from 1916 to mid-1921 were only made in New York (where Gennett had offices at 9-11 East 37th Street). The first matrix series ran from 5000 to c. 5250 and was followed by the 1000 to c. 1482 series. Then in late 1918 Gennett started recording laterally and was the first independent company to do so (the first release was 4500, 2/19). OKeh and Lyric followed in December and by 1920 most companies had switched to lateral recording (except Edison and Pathé). Although Gennett was sued by Victor for patent infringement, they finally won in the Supreme Court in 1922. Gennett continued several Starr series, which were logically numbered after the price (6500 series 65 c, 7500 series 75 c, 8500 series 85 c). The top price was $4 for some issues.

Experimental electrical recordings were made in 1925 and 1926 (those issued had "GE" in a small circle on the label), but the complete changeover was not until September, 1926. The starting point was GEX 277 (September 21, 1926) for the New York series and GE 12456 February 2, 1926) for the Richmond series. The GE prefix indicated use of the General Electric recording process. (There were some strange prefixes before this: BEX 271-272 and WEX 273-276; were the latter Western Electric recordings?) The official debut of electrical recordings was January, 1927, when the "Electrobeam" label was launched (from 6001), but already in 1926 many electrical recordings had been issued in the 3001 series (some later reissued in the 6001 series - and the 6001 series also still contained acoustical recordings.) In December 1926 at several sessions in New York duplicate takes were made on the old acoustic equipment (HAX 362-371, 388-389, 399-406 = the corresponding GEX-numbers). In a few cases these were actually used for issue instead of the electrically recorded versions.

The first Gennett to be announced as electrical was 5750 by pianist Vera Guilaroff (issued in March, 1926), but this was actually recorded by the Compo Company in Montreal on December 11, 1925. The first electrical record to be issued on Gennett must be 5592 by Kitty Irvin (issued in January, 1925). This was recorded by Orlando Marsh as were 5745 (1/26), 5753 (4/26) and 5755 (5/26) by Chicago organist Milton Charles. It is my firm belief that Marsh also recorded those Black Patti issues that were not found in the Gennett ledgers.

The Gennett label was dropped in December 1930 and henceforth the recordings were issued on the cheaper Champion label (until December, 1934). Some 600 vertical titles and some 8000 lateral titles had been issued on Gennett (it is interesting to note that many titles and/or alternate takes appeared only on labels which leased Gennett material such as Bell and Herwin).

Gennett masters appeared on Apex and Starr Gennett in Canada, Edison Bell Winner, Velvet Face, Portland, Aco, Guardsman, Coliseum, Scala, Homochord, Beltona, Duophone, Vocalion, Meloto, Tower, Adelphi and Westport in the UK and Ekophon in Sweden (only two titles known so far). Gennett recordings even made their way onto domestic labels as far away as Australia! Angelus, Clifford, Electron, Regent, Starr and Vocalion were all Australian labels which used Gennett masters. At present, no issues are known on French, German or Eastern European labels.

Starr, as well as issuing records on their own labels were a major supplier to a plethora of small record concerns in the USA, labels such as Herwin, Bell, Connorized, Rich-Tone, Silvertone and many others. So vast is this field that it requires a separate article dedicated to just those US labels!

*** This was not an Irish series as might be expected. 1924 catalogue: Gennett records released under the Green Label represent the highest attainment in the art of sound recording. The best standard numbers come to you under this label which assures variety in selection, perfect reproduction and the real musicianship of the artist.

**** This series contained many ethic recordings (French, German, Serbian, Spanish, Swedish, Turkish, West Indian - including six discs with Lionel Belasco, 20354-20356, 20359-20361). Many private records were issued without catalogue number and without the Gennett name

***** This has often been confused in discographies with Decca's Champion series of the 1930's.

The "ethnic" records (issued from August, 1921) had the following prefixes:

W = Welsh (all from Winner)